Špilberk is a castle and fortress that form a landmark in the centre of Brno. 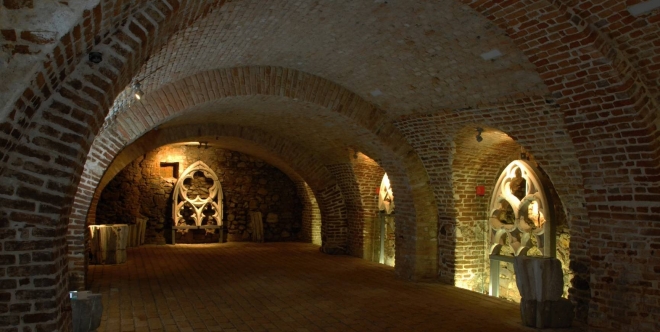 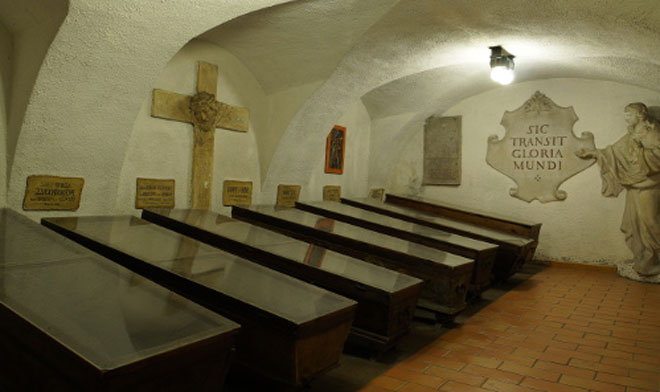 The Capuchin Crypt is located at the Kapucínské square in the centre of Brno, under the Church of the Finding of the Holy Cross.  Founded in the middle of the 17th century, it served as a place for burying the members and benefactors of the Capuchin order until 1787. The members of the order were buried directly on the ground, without coffins. An ingenious ventilation system combined with the specific composition of the earth in the subsoil enabled a natural mummification of the bodies laid to rest there. The most famous benefactor of the church is the colonel of the Austrian Pandurs, Baron Trenck, who had been sentenced to life imprisonment. After his death and burial here in 1749, his mummified body was placed in a metal coffin with a glass lid in 1872.

The villa, designed by the architect Ludwig Mies van der Rohe and built in 1929–1930 for Greta and Fritz Tugendhat, is a world-famous example modern architecture. It is the only example of modern architecture in the Czech Republic that is designated a World Heritage Site by UNESCO.

The villa is located at the Černopolní street 45 in Brno. It is regarded as the most significant pre-war masterpiece of the architect Mies van der Rohe who is considered one of the founders of 20th century modern architecture.  It is one the most important functionalist works of modern architecture. The project is considered revolutionary for its time mainly for the uninterrupted living space, the possibility of connecting the interior and exterior by sliding the windows completely into the floor, and the supporting system of the whole house made of riveted steel columns, used for the first time to build a family house. An important part of the exhibition is the furniture also designed by Mies van der Rohe.

It is the first theatre in Europe with electrical lighting. It is a protected cultural monument of the Czech Republic and also an important architectural monument of Brno. The theatre, located at Malinovského square, was designed by the architecture studio Fellner & Helmer which designed a number of European theatres. Built in a combination of Neo-renaissance, Neo-baroque and Neoclassical architectural styles, it was completed in 1882. The decision to use an invention only three years old, the electric light bulb, was unique at that time. The inventor of the light bulb himself, Thomas Alva Edison, prepared the electrical installation project for the theatre and visited the theatre 25 years later to inspect the result of his work. The Mahen Theatre is therefore the first theatre in Europe with electrical lighting and is a national technical monument. The reconstruction of the stage in 1936 made the Mahen Theatre one with the most modern equipment in Czechoslovakia at that time. 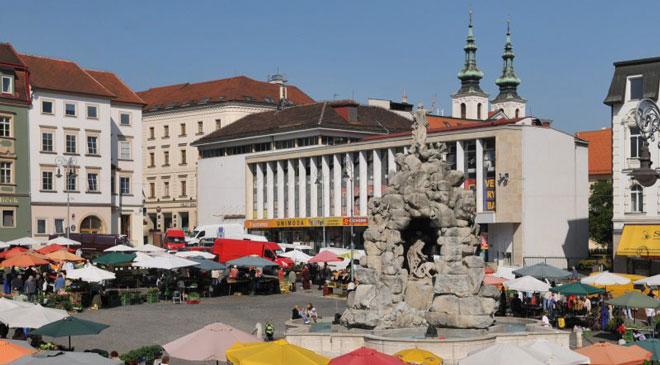 The marketplace, originally called the Upper Market, was established in the 13th century on a then undeveloped site. It also included the Poultry Market, the Pottery Market and the Junk Market. It was not until the 15th century that the Cabbage Market (also “Vegetable Market, in German “Krautmarkt”) received its current name.

The dominant feature of the square is the Parnassus fountain dating back to the end of the 17th century, located roughly in the middle of the space. Designed by Johann Bernhard Fischer von Erlach, it was built in 1693–1695 by Adam Tobiáš Kracker of Vienna.

The upper part of the square features the column of the Holy Trinity, built in 1729, during the High Baroque period, by Antonín Schweigl, bearing sculptures of the Immaculate Conception, St. John of Nepomuk, St. Primitive, St. Cyril, and two angels.

Important buildings surrounding the square include the Dietrichstein Palace (formerly the seat of the Supreme Court, later of the Moravian Museum), the Goose on a String Theatre (Palace Hausperský von Fanal), the palace of the abbot of Žďár monastery, called “Malý Špalíček” (created by connecting four buildings of Gothic and Renaissance origin), and the recently renovated Reduta Theatre. At the head of the lower part of the square is the prominent building no. 2, where the Faculty of Law was located in 1969–1990.

Cathedral of St. Peter and Paul 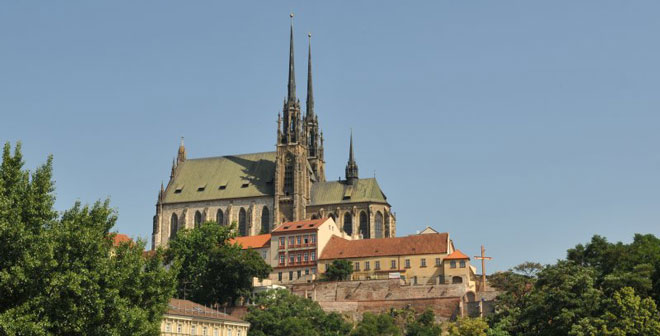 Located on the Petrov hill, the Brno cathedral is also called “Petrov”. The first mention of the cathedral dates back as late as the 12th century. It was originally dedicated to St. Peter. Since then, the building has undergone several reconstructions in the Gothic period. During the reconstruction around 1500, the consecration was extended to include both St. Peter and Paul. The cathedral was damaged and destroyed by fire several times during the Thirty Years’ War, in particular, in 1643, while the Swedish army was besieging Brno. The subsequent Baroque restoration took place in two stages in 1651–1652 and 1743-48 when, following the designs of Mauric Grimm, the church took on its current form. In 1777, Pope Pius VI issued a bull certifying the foundation of the Brno diocese and the church acquired the status of a cathedral. At the end of the 19th century, the chancel was modified to a Gothic appearance and completely reconstructed under the direction of the Viennese architect August Kirstein. Among other construction changes, two spires were added, and the cathedral was completed in 1909.

In the interior, it is worth mentioning the statue of Madonna and Child from about 1300, the late Gothic pieta and Baroque altars and the pulpit. The sightseeing tour includes the Romanesque-Gothic crypt with the foundations of the original church, and a jewel box with liturgical objects. You can walk up the stairs to the spires of the cathedral and see the panoramic view of Brno. In 2013, a symbolic sculpture of the Slav apostles Cyril and Methodius was installed near the cathedral.

Interestingly, the cathedral bells chime to announce noon at 11 o’clock, an hour early. Legend has it that they ring an hour earlier to commemorate the end of the Swedish siege of the city, when the Swedish general said that if he failed to conquer the city before the clock strikes noon, he would end the siege.  The Brno defenders struck noon early, at 11 o’clock, and the Swedes withdrew and left. This trick saved Brno.

The Brno Old Town Hall, located on Radnická Street, between the Cabbage Market and the Freedom Square, is a former town hall and the oldest secular building in the city. At present the Brno cultural and information centre can be found there. The Brno wheel and dragon, which feature in several legends, are installed in the passage of the tower.

Where to find us

If you have any questions, do not hesitate to contact us.

Your question has been sent.

Rooms can also be booked using the following contacts